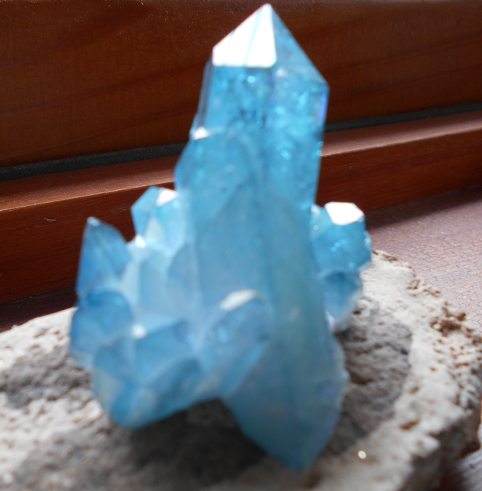 Aqua Aura has a beautiful electric blue color with subtle flashes of rainbow iridescence. It aligns to the throat, thymus, third eye and higher crown chakras and the water, fire, air, and starlight element. We, the aqua aura crystal consciousness come forward to greet you and to bring to you words of love, light and joy. We are in actuality a clear quartz crystal that has been imbued through a human technology with the energies of the metal gold which has created our beautiful aqua blue color and by this process, it has imbued our consciousness with additional frequencies with which we now hold and vibrate. We help people to connect to their original Divine blueprint and to their Lemurian lifetimes. We help people to remember the majesty of their being at the deepest level.

Many beings came during the epochs of Lemurian existence and civilization upon this planet. They came to experience life in physical body, they came to experience all the wonder, glory and magic of this world. There is much that is still unseen by today's human eyes that are now coming to the surface. The wonders and the glories of the planet in its Eden form are coming to pass. During the times of Lemuria, souls entered into human form and also other forms through the animal kingdom, the bird kingdom, the trees and the flowers in order to have the experience of each of those life forms so that this experience was something that their soul took on forevermore. In this way in what is termed Oneness, all is as One.

In this way, the souls came to the continent known as Lemuria to begin the experience of the gathering of information and sensory experience of feelings, the gathering and process of feeling and being the form that they entered on a temporary basis so that they could take back that experience for their soul. This continued for many ages and they experienced much and they worked their way to the point where they could have a human experience and they entered into bodies on the physical plane of life, although it was not as dense and solid as it is in these current times. Their bodies were more ethereal, their bodies were more refined and filled with luminous Light for they had not yet experienced separation from the Oneness. That was to come later.

We, the aqua aura crystal consciousness can take an individual back to these times, to their individual experiences as soul in a human body as well as the other forms of life that existed upon the planet at that time and those that are still in the current times. We enable each individual during these current times to connect to that ancient continent, that ancient civilization where wonder and magic happened on a daily basis. Much was created at that time in the flora and the fauna, in species of the animal kingdom, the bird kingdom, the tree kingdom and the sea kingdoms.

Everything was in a state of experimentation and expansion. It was all good, all creations were good, all creations were in harmony with the Divine universal laws. There were many species of human forms upon the continent of Lemuria at that time. People walked the Earth with different color skin from what humanity sees now. Many were blue skinned, many were golden skinned, there were many variations, and this was for the experience, this was to relate being in a human body for the purposes of experimental discovery.

This was exciting and new! They did not understand that there was a big temptation involved with this experiment and that was to also connect, not only to the luminosity of their being but the shadow element that always exists at the same time as the Light. The energies of the Divine feminine and the Divine masculine at work, and this created the desire to experiment as the male and the female and so, souls began to incarnate in order to experience one aspect of their being or the other. This created joyous love, joyous experience but also began to delineate even greater division.

And so it continued on through the ages until the time of the destruction of the continent of Lemuria; as it was seen, that there needed to be a renewal of the races upon the planet where they did not experience separation, where they remembered the harmony that comes from being in Oneness with Creator Source. And the beautiful continent of Lemuria sank beneath the ocean waves and was gone except for a few places upon the planet where the topmost portions of their continent survived in the form of islands in the sea.

We, the aqua aura crystal consciousness will help each individual to connect with those times and the aspect within their overall collective consciousness to remember, to bring back the gift of those times. Those who work with us will be guided and encouraged to remember, for this is the time of remembrance. In this current time of now, humanity is remembering, is awakening to all that lives in their highest potentials. We look forward to working with humanity in this way. We bless and thank you for hearing our message. So be it!

All rights reserved to the author/scribe and www.therainbowscribe.com. Copying, translating and sharing of this copyrighted material is not permitted. The making of videos in any language is not permitted. This article is for the reading enjoyment of those who come to the website:

The Wisdom of The Wise Ones You Tube videos

When We Open Our Heart

What Is The Golden Rule?

Our Kinship With The Earth and Each Other

The Gift of Life

Living From The Inside Out

Copyrighted material 2008-2021 to Marlene Swetlishoff. And www.theRainbowScribe.com. All rights reserved.